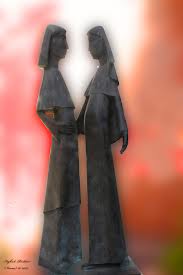 This representation of the meeting of two pregnant Jewish women, Miriam and Elisheva, is in the grounds of the Church of the Visitation at Ein Karem, near to Jeruslaem. We know them better as Mary, the mother of Jesus and Elizabeth, her cousin, mother of John the Baptist. We celebrated that occasion liturgically at the end of May.

What a fine image it is, of two women celebrating the joy of pregnancy yet aware of the risks of childbirth. Both seem to be aware from the Gospel account that theirs is no ordinary conception. Indeed we are told that Elizabeth’s child leapt in her womb as she greeted Mary with the words “What have I done to be visited by the Mother of my Lord?”

The birth of a child brings both joy and pain, expectancy and fear. From one generation to the next, life is transmitted through this singular experience. The creation of life, the giving birth after months of waiting and the subsequent care of a child through the early years of dependency are part of our continuing human story.

So it is for the Church. Growth does not come without pain, without mistakes. Joy, yes, but sorrow too as individually and collectively we move forward, stumbling and falling, getting up and starting again.

Every so often, some event, some person, some meeting reinvigorates us, and the sun shines. Francis has had that effect on the Church since his election in mid-March. He has shown us another way of doing things. He is a person who respects people. Recently he met with Jose Mujica, the President of Uruguay, a man who lives a simple lifestyle alongside his people, donating 90% of his salary to charities. 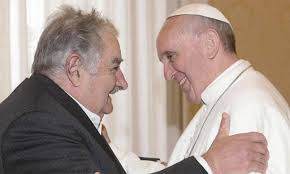 “Wearing a blue shirt with no tie, a green sweater and a dark jacket, Mujica, 78, was received very warmly by the Pope and before they walked in for their private meeting, they took a few minutes to remember Uruguayan theologian and writer Alberto Methol Ferré, ‘a common friend’ recently deceased and who for decades was an advisor to the Vatican” –UCANEWS.

It didn’t seem to trouble either man that Mujica’s dress was so informal. They met as persons who had something to say to each other, just as Mary and Elizabeth met, supposedly near the village of Ein Karem, all those years ago.

We are indeed fortunate to live in a time when our meeting with the Lord through the community that is his Church is being given a fresh honesty and integrity.

Who I am, matters.