I bow my head

There can’t have been much time on that wet March evening in Rome between the white smoke and the appearance of Papa Francesco before the crowds waiting in St Peter’s Square. Not much time to plan a response to their welcome or to write fine words. But what we got was significant in its simplicity, a smiling “Good evening” and then before any blessing by the new Bishop of Rome, a request that the people, through their prayer, bless him.

He bowed his head to receive it and the silence of the crowd was palpable.

It was but one of many gestures that have come to mark the first 100 days for Pope Francis. Few words, but he is what he is, real. He can’t be fussed with unnecessary ritual, his Wednesday sermons at Mass are short and often conversational and he is not averse to picking up the ‘phone himself to speak directly to someone.

Here is surely a prayer-centred man, not someone for whom prayer is a bolt-on addition but for whom prayer is the very breath of life that he breathes, minute by minute. His style is simple and straight forward and there is an evident warmth in his smile that has won him respect, both within the Church and beyond.

The photograph of his meeting with Religious from Latin America showed him seated as one of a circle, listening and sharing, a Bishop with his guests, anxious to understand, wanting to re-assure. 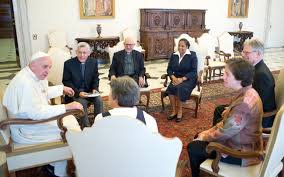 And all this in such a short space of time, the reality of gesture, the significant presence and the attention of the caring pastor, all before a word of an encyclical is published.

He has said that, from the time it became clear that he had been elected in the Conclave, he felt at peace. Yet ahead of him are the enormous problems currently facing the Church, enough to daunt anyone. The evidence of these first few weeks is that he will meet such challenges with the same steady resolve he has so far shown in coming to terms with his own changed circumstances.

The prayer of the people, heads bowed under the slanting rain that Wednesday evening in March, must continue for the man who bowed his own head, seeking blessing.