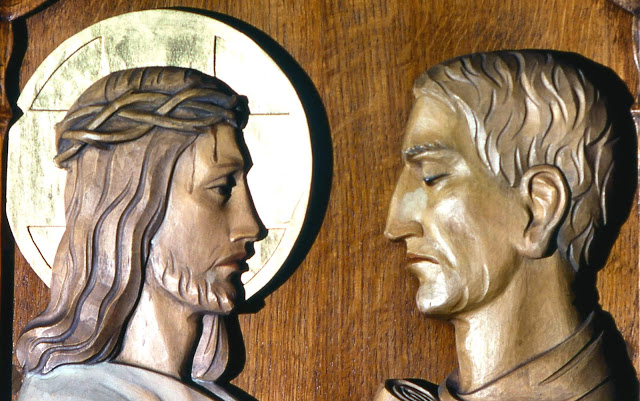 The title of this piece surely rings a bell with all readers of this blog. They are the words of one of my predecessors though he knew nothing of blogs or the Internet. A predecessor of mine? Yes, and of yours too. His name of course, is Paul of Tarsus and we do well to look on him not only as a role model or example, but as a predecessor of ours.

He, Paul, you, me, our local parish priest and goodness knows how many others, are all engaged in the same world-changing mission, preaching Christ Jesus. He, Paul of Tarsus and we of Bangor, Bognor Regis and beautiful Bundoran, have all been called to let people know of the difference the Risen Jesus makes to our living, both here and hereafter. We are co-workers then, Paul and you and I.

But of course, as well as being a predecessor of ours on mission for Christ, Paul is indeed an example to us all. If we want to know how to get started in this great work or if we need to recover our strength and our courage, Paul provides the answer. Here is a man who could and did write beautifully about the depths of his relationship with the Living Jesus, could and did write beautifully about the greatness of love, and could and did endure all kinds of hardships for Christ, but here also is a man who had the courage to stand up to the leaders of the Church when he thought they were wrong, stand up even to the appointed one, Peter the rock.

Where did he get all this? He had no handy guide, "Teach Yourself Christianity" but he had something beyond all such and here in his letter to the Philippians he urges that same rich source on his readers, "Let this mind be in you which was also in Christ Jesus". Empowered by such a driving force he could and did deal with all kinds of situations as and when they arose. Empowered by such a driving force, Paul insists that we can too.

Like Paul, we have come upon faith in Christ Jesus without any direct contact with Jesus, "born out of due time" as he likes to put it. We have been led to this faith by events and accidents and by people who gently took us by the hand and led us there. Now that we have found this faith for ourselves, Paul urges us to let that faith form our thinking and our actions, "the mind of Christ Jesus" at work in us. Thus driven, thus empowered, we can rely on Christ Jesus himself to take us beyond defending any particular institution or tradition but to where he himself now is in the world of today. Paul does not doubt it, should we?

Fr Val has been digging a lonely furrow of thoughtful and thought-provoking articles on his blog site http://jenico.blogspot.co.uk Why not take a visit !