I am a catholic priest of the Diocese of Westminster and currently serving as parish priest in Neasden, North West London.
During my diaconate year, 1985, I had the opportunity of going to St Beuno’s, N.Wales on the ‘3M’ course, which included a 30day retreat; this confirmed my Ignatian Spirituality which had been surfacing during my time at Heythrop College.
From this I was invited by the team at St Beuno’s, to direct 8 day and 30 day retreats under supervision from 1986-1993, with my primary ministry as assistant priest in Hackney and parish priest in Clapton Park in the East End of London. (I was blessed with a very understanding parish priest in Hackney and further blessed with a retired priest in Clapton Park!)
During this time I was the RC member of an ecumenical team responsible for establishing and running two year ongoing courses for training spiritual directors at the London Diocesan Centre for Spiritual Direction. (Now subsumed into The London Centre for Spirituality).
For 13years, 1992-2005, with permission from Cardinal Basil Hume, my Bishop, I ministered outside the Diocese; 6 years in Colorado USA, and 7 years at Corrymeela in Co. Antrim, Northern Ireland where I was born.
The time in the States was divided between Retreat work and helping to set up Parishes in the relatively new Diocese of Colorado Springs which had a big shortage of priests. This time taught me much about real collaborative parish work….many flourishing parishes with non-ordained men and woman (did I just say that!) mandated by the Bishop with full responsibility, with I and other priests on the parish teams as Sacramental Ministers.
The Ecumenical Reconciliation Community of  Corrymeela, taught me that the Catholic understanding of our Faith journey in Christ cut no more ice than the Presbyterian or Church of Ireland’s or Baptist’s understanding. As Faith and Life Co-ordinator I was responsible for developing and delivering Inter-denominational, Inter-Faith and Spirituality programmes for national and international groups. Groups committed to an explicit religious faith (I still get an inner smile when I think of the many Presbyterians I journeyed with and how much we learned together.) through to groups of university students who wanted to spend a weekend arguing the toss of whether God existed or not!
Now back in the Diocese and Parish more aware of ‘God in all Things’ and with the help of Daniel O’Leary writings and ACTA members, heartened by Papa Francis, enabling each other in the parish to ‘Recover our Sacramental Vision’ that begins with the heart.

Written by Gerry McFlynn
Published: 21 May 2013 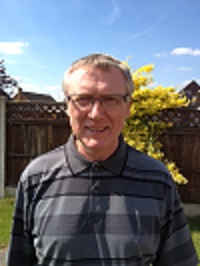 Born in N Ireland in 1947. Ordained for Down & Connor diocese in 1973.
Worked for 5 years in parish in Belfast, then as Chaplain of Pax Christi, UK, followed by Chaplaincy work at LSU College of Education, Southampton, Chaplain at HMP Wormwood Scrubs, and currently with the Irish Chaplaincy in Britain ( London).  Also a member of the Irish Association of Irish Priests.

I have worked for the Catholic Church from the age of 13, when I set up and ran the Lambeth Deanery Youth Council in the Diocese of Southwark. I was also a member for the Diocesan Youth Chaplaincy Support Group. After gaining the National Certificate in Youth and Community Work, I became a Deanery Youth Worker for Brentwood Diocese.

Marriage and 4 children followed. Some years later, I returned to study and in 2006, I gained a Diploma in Theology from Lampeter University in Wales. In 2009, I was awarded an MA in Pastoral Theology from St. Mary’s University College, London.
For 10 years I volunteered my services to design, create and install art work for the Rite of Election at St. George’s Cathedral, Southwark and for the annual Day of Celebration at Aylesford.

I currently work as the Administrator for Education for Parish Service in Southwark, and team teach the Evangelisation & Mission module on the Foundation Degree in Pastoral Ministry accredited by St. Mary’s University College.

I have also been employed part-time for the past 5 years by a London parish, where I am responsible for creating and delivering their First Communion programme for children and parents.

My aim is that A Call to Action should become a place where all may be heard and valued, a place where the Spirit’s presence is acknowledged within the sensus fidelium. Lumen gentium 37 says 'The laity should disclose their needs and desires to the pastors with that liberty and confidence which befits the children of God and brothers and sisters in Christ. To the extent of their knowledge, competence or authority the laity are entitled and, indeed, sometimes duty bound, to express their opinion on matters which concern the good of the Church.'

I see A Call to Action as a space where this invitation from the Fathers of the Second Vatican Council could become a reality.

Born in Wales in 1947 to a Jewish convert Dad & a Welsh Catholic Mum, I was raised with four brothers in Staffordshire. I married Frank from Cork in 1967 and had four children between 1969 and 1980. During this time I also gained a BA and MA in Latin at Birmingham University. My various roles include Chair of Playgroup, Catholic Comprehensive PTA committee, Catholic Area Education Committee, elected to the Diocesan Schools Commission. I was Foundation Governor at both St Thomas Aquinas School(Vice-chair)and St Judes Primary School and a Local Authority ESL teacher for Asian women. A part-time student Birmingham Conservatoire, I gained my PGCE from Newman College and taught full-time as a primary school teacher till 1997. I was a Teacher Fellow in Science at Newman for a short time. I volunteered as a part-time music teacher in an inner-city school and I am involved in many  musical activities. The imposition of the new translation of the Mass - without inclusive language or ecumenical texts or dynamic equivalence or collegial consultation, made me decide I must do more to help bring about change in our Church. I have an interest in theology and was inspired by the Portsmouth Seven's letter in the Tablet to attend the Heythrop meeting in 2012. I am grateful for the opportunity  to promote the Call to Action in Birmingham Diocese and further afield.

My name is Marian Short and I belong to the Vocation Sisters, a small group founded in 1945 for the discernment of vocations.  The ministries to which I have been called have varied over the past 50 years. These include vocation ministry, social work, individual and group counselling, parish director, staff member of  a seminary with responsibility for human development, vicar for religious for Kent  I have also been in various administrative posts in my congregation.  I have a particular interest in womens’ role in the Church. In 1967, when I was a young religious, I had the opportunity to study at Corpus Christi Catechetical Centre, it was in its second year and everyone was filled with the hope and promise of Vatican2. We had some wonderful lecturers and the openness and spirit of Vatican 2 had certainly flowed into the college. I have been blessed with colleagues and friends who have shared the vision of a church which ’ promotes mutual esteem, reverence and harmony, allowing for every legitimate difference, so that we can begin a dialogue among the People of God, pastors and faithful, which may become steadily more fruitful.’Gaudium et Spes . I am grateful to ‘ A Call To Action’ for this opportunity for us to work together for the fulfilment of this vision.