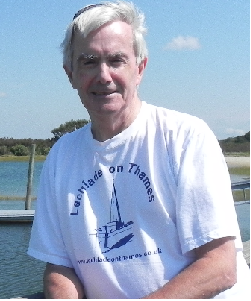 My parents moved to the UK from rural Ireland in the late 1920's after they got married, so I am a cradle catholic. I went to St Benedict's School Ealing, and sang in the Abbey Choir for over 20 years, and in other choirs on and off ever since. I was an altar server from a very early age, and survived the hell fire and damnation missions so "popular" at that time.

Having qualified as a chartered accountant I spent several decades running a variety of businesses in FD and CEO positions.

The foundation of my belief today is really simple. I believe God created the world – probably more as a process than a single act – and through the Ten Commandments and the teachings of Jesus showed us what a good life should look like...and what it should avoid. He also made it clear that he wanted us to lead a good life and in due course join him in heaven. He gave us a brain and the free will to make decisions about our lives. I am determined to use those gifts, and, where necessary, to confront those who would seek to effectively deny me that right. History, even up to the present day, has had its share of dictators and the damage they do, and it is therefore astonishing to find that the Vatican should wish to add to that unwelcome list. Do the Pope and curia today really echo the life of Jesus as fully as one might hope?

The "corporate" church has lost its way, and now that I am retired I have the time and the inclination to be a nuisance to the hierarchy in an effort to get them to listen, and to allow the laity to play a proper and full part in the life of the church, and that specifically includes women and their ability to be priests and (of course) bishops too!