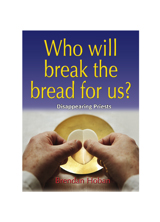 THE IRISH Church faces large-scale parish closures within 20 years unless married former priests are permitted to serve again, a spokesman for the Association of Catholic Priests (ACP) has warned.

In his new book, Who Will Break Bread For Us?, Fr Brendan Hoban calls on the Church to rethink mandatory clerical celibacy. He also suggests it should invite some of the hundreds of men who left the priesthood, for reasons such as to marry, to return to ministry.  “At one stroke, they could help solve the eucharistic famine that is approaching us,” said Fr Hoban. He added that a parish in the west of Ireland has seven former priests among its parishioners and some of these would be very willing to serve again as priests even in a part-time capacity.

He also urged the Church to extend the priesthood to permanent deacons. In his own Diocese of Killala there are currently just seven priests under the age of 55. By 2032, there will be seven priests under 75 to serve 22 parishes. The overall number of seminarians in Ireland has declined 87 per cent over 23 years from 525 in 1990 to 70 in 2013.

“The Irish Church is in denial about the level of vocations,” said Fr Hoban. “We are sleepwalking towards the precipice and are going to fall over in 10 to 20 years’ time.”

Meanwhile, a new Catholic group formed to give laypeople a bigger say in the running of the Irish Church is to join with the Association of Catholic Priests in seeking a meeting with the hierarchy over the priest shortage. The Association of Catholics in Ireland (ACI), which has committed itself to reform and renewal of the Church, was formally launched in Dublin on Saturday. According to ACI spokesman, Noel McCann, “It is time for the hierarchy to engage in dialogue with groups such as the ACI and ACP.”