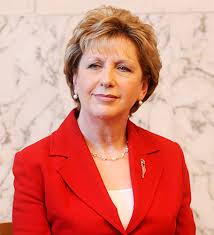 Mary McAleese, former President of Ireland (1997 – 2011), says it is essential for the future of the Church that the laity speaks out and is able to enter into dialogue with the bishops. In conversation with journalist and broadcaster Clifford Longley at Westminster Cathedral Hall on 23rd June in a meeting organised by ACTA Southwark, Mrs McAleese was sharing her views on how the Church is responding to the vision for it set out by Pope Francis.

She told the audience of nearly 150 how, at the end of her second term as President, she felt compelled by the sexual abuse crisis in the Church to go to Rome to study Canon Law in an attempt to discover how such things could have been allowed to happen. What she found during her time there convinced her that both culturally and organisationally the Church was not properly equipped for its leadership role. While she welcomed the new direction given by Pope Francis , she expressed concern that the management structures and practice were not yet in place to bring it into effect. “When you discover a matter that needs investigation,” she said, “the standard approach in civil society is to set up a representative group of people with relevant knowledge and expertise to examine the facts and put forward a ‘white paper’ that can then be discussed with those in authority, laws amended where necessary and an appropriate action plan implemented. Warm words alone are not sufficient.”

She was also highly critical of the lack of consultation of women in the Church, most obviously by celibate bishops discussing Marriage and the Family. To deny a consultative role to half the members of the Church in this way deprives the Church of many gifts.

Responding to questions from the floor, Mary McAleese also told of her anguish on first hearing from her son the distress he had suffered from being gay. She emphasised that young people do not choose to be gay and highlighted the difficulty for Catholics when they discover that the Church they belong to treats them as ‘disordered’ or worse.
Commenting on her time at the Pontifical Gregorian University, Mary McAleese criticised what she referred to as “the outdated clericalist training” of priests which does not adequately prepare them for collaborative ministry as envisaged by Vatican 2. She had no easy solutions to offer but said that there was a responsibility on the lay members of the Church to contribute to discussions on the development and implementation of Church teaching and that it was vital for the Church for that voice to be heard.