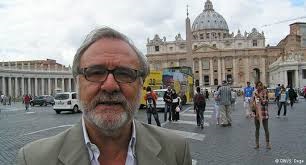 Where are we going with Pope Francis? That’s the question for ACTA’s annual conference. If you can, grab the chance to hear a top observer of the Vatican and the Catholic Church, Marco Politi, on the same subject. During his visit to the UK from 12 to 14 October, and then in Ireland, Politi will illuminate Pope Francis’s renewal polices and the opposition to them, along the lines of his latest book, Pope Francis Among the Wolves. He wants to know what British Catholics think, and there will be discussion after each lecture.

For more than 40 years, Politi has been commenting from Rome on the struggle to update the Catholic Church. As well as studying Pope Francis, he has followed Pope John Paul II and Pope Benedict XVI on more than 80 trips around the world, and has regularly contributed to the BBC, CNN and ABC.

The book he wrote with Carl Bernstein, His Holiness, was an international best seller.

He believes there is a battle going on for the soul of the Catholic Church, in which we are all involved, and where there is no certainty that Pope Francis will win. Come to hear the insights and analysis of a journalist and writer on the inside track.

Columnist for the Italian daily newspaper, Fatto Quotidiano, Marco Politi has built a successful career commentating on the Vatican and religious matters since the 1970s. In addition to his recent coverage of pope Francis, he has followed pope John Paul II and Pope Benedict XVI on over 80 trips around the world and has regularly contributed to the bbc, cnn and abc news channels.

Author of His Holiness: John Paul II and the Hidden History of Our Time, Marco politi’s lastest book, Pope Francis Among the Wolves: The Inside Story of a Revolution addresses the power struggle between the roman curia and the global catholic church from Pope Benedict XVI to the current day under Pope Francis.