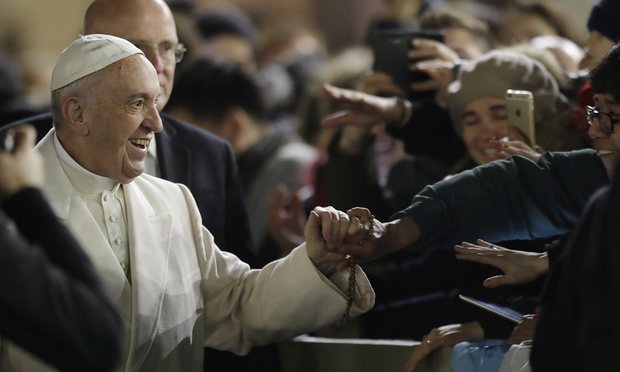 Pope Francis leads an organisation that fought against democracy, liberty, equality and feminism for nearly 200 years after the French revolution of 1789. It is a paradox that he is now heralded in some quarters as the global champion of all those causes, which everywhere seem under attack. The key to understanding this contradiction is that the pope is not himself a liberal. He is a conservative with a small c, mistrustful of all grand schemes of human betterment, whether socialist or libertarian, and he believes in sin and the devil – as do most of his 1.2 billion followers. If conservatism stands for anything more than the remorseless pursuit by the strong of their advantage over the weak, it is a profound suspicion of the human capacity to be good, a belief, as Milton put it, that we shall never cease “hammering from our flinty hearts the seeds and sparkles of new miseries for ourselves”. This isn’t the whole truth, but at a time when a world order seemingly based on rational self-interest is being consumed in greed and rage – including the “plague of terrorism” that Francis urged all to confront as it struck Turkey again – a little of Milton’s grim scepticism is salutary; even, almost, hopeful.

For the pope, a world order based on the unlimited satisfaction of individual wants is unattainable, and the attempt to reach it destructive of the world around us, and of the peace of our inner worlds. As he wrote 18 months ago in his powerful encyclical on the environment: “When people become self-centred and self-enclosed, their greed increases. The emptier a person’s heart is, the more he or she needs things to buy, own and consume. It becomes almost impossible to accept the limits imposed by reality.” This attack was not confined to the one encyclical, but has been one of the most important themes of all his preaching, most recently in his New Year homily: “The lack of physical (and not virtual) contact is cauterising our hearts and making us lose the capacity for tenderness and wonder, for pity and compassion.” But, he continued, “we are not interchangeable items of merchandise or information processors. We are children, we are family, we are God’s People.”

This is the development of a consistent line of Catholic criticism of the economist’s world that goes back at least​ as far as Pope Leo XIII’s 1891 Rerum Novarum, and arguably comes from the roots of western civilisation, in Aristotle and Aquinas. Catholic social teaching offers a coherent perspective on how the individual fits into society. It addresses directly the two great questions of our time: how the economy should be arranged to benefit everyone, and how our societies should treat the natural environment. Pope Francis has been an astonishingly eloquent advocate for human rights, for the environment, for peace and against the ravages of capitalism. He doesn’t do fluffy. In fact, at times, he sounds like a pure revolutionary.

“We should be particularly indignant at the enormous inequalities in our midst,” he wrote in his 2015 encyclical. “We fail to see that some are mired in desperate and degrading poverty, with no way out, while others have not the faintest idea of what to do with their possessions, vainly showing off their supposed superiority and leaving behind them so much waste which, if it were the case everywhere, would destroy the planet. ... We continue to tolerate that some consider themselves more human than others.” 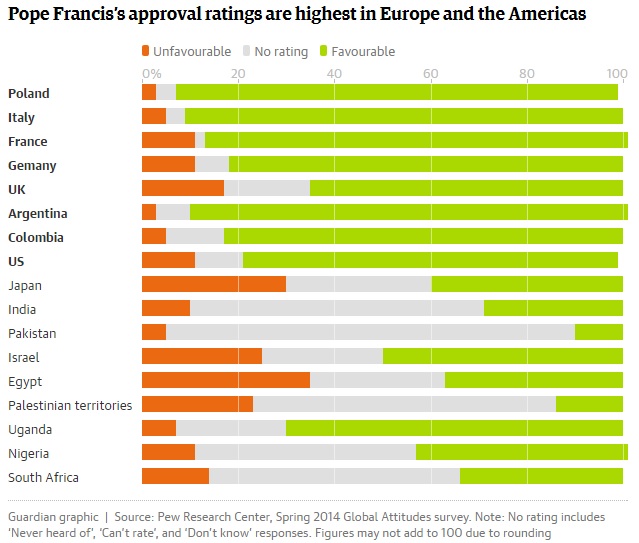 With a passion perhaps possible only to a South American, he loathes the turbocharged US model of capitalism unleashed by Ronald Reagan: he entirely rejects the idea that greed restrained only by self-interest operating through a market will make the world just or good. His Catholicism is almost the polar opposite to the dominant strains of white American evangelical Christianity. He unequivocally opposes torture and the persecution of refugees, and even the death penalty, which are all causes dear to religious Republicans. More Americans support torture as an instrument of government policy than do the inhabitants of Iraq, Sudan or Afghanistan. With a series of dramatic gestures – visiting refugee camps; taking migrants into the Vatican; publicly washing the feet of a Muslim woman – the pope has demonstrated that he wants his church to stand alongside refugees and migrants. As archbishop of Buenos Aires he would visit the slums – and take a bus to get there.

These are gestures eloquent of a much deeper intent. They set him against much of the modern world and the regimes in both Moscow and Washington. But they have also aroused bitter and well-funded opposition within his own church. The Vatican is a deeply and perhaps necessarily reactionary organisation, but an intelligent conservative like Pope Francis knows when times have changed and when to adapt. A reactionary confuses the present with the eternal, and thus can’t admit any change at all.

The enemies around him
Reactionaries must always lose in the long run. The world does change, and the change can’t be forever denied. But within the Catholic church they can and sometimes do manage to hold their positions for centuries. This is the dilemma that the pope faces as he tries to help the church come to terms with feminism. The Catholic church is a deeply patriarchal organisation: no one ever called a pope the Holy Mother; at the same time it is dependent on women whose work and devotion sustains the whole edifice. The concessions to feminism that he proposes don’t go as far as they might. He maintains the ban on women priests, and the complete opposition to abortion – although all priests may now forgive women who ask for it. But he has moved decisively to allow parishes to recognise some second marriages as real ones.

He has been denounced for this by the reactionaries within the church as a heretic, a destructive progressive, and a man whose policies must lead to a historic schism and break with tradition. At the same time he has greatly disappointed progressives who had hoped for some shift in substance on the full acceptance of gay people and on the role of women in the church’s hierarchy.

A champion of humanity
Once more the apparent paradox dissolves in the light of the fact this is a conservative who believes that sin can corrupt anything, even, or perhaps especially, the church he heads. Church law and church rules can themselves become unrealistic schemes for organising society, as destructive in their dogmatic application as the precepts of Ayn Rand. His reactionary enemies, already praying and plotting for his succession, want a pope to proclaim “absolute moral norms that prohibit intrinsically evil acts and that are binding without exceptions” – which might sound reasonable until you realise they are not quoting a denunciation of war or slavery, but Pope John Paul II denouncing contraception.

Yet in a world full of bewildering change, progressives as well as conservatives need to remember that moral absolutes exist and that there are some evils with which it is always wrong to compromise. Their form changes. A quarter of a century ago the Soviet Union fell. The attitudes that shaped the church then will not help it – or us – now. Global poverty, global greed, and the destruction of the environment are what threaten us today, and, however unlikely, Pope Francis is a champion of humanity against these evils.