The crimes of the Catholic Church: not in our names 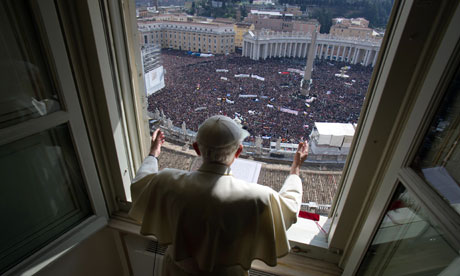 The Catholic church is on its knees, and not in the way it would like. In fact, the last thing anyone would ask a bishop or cardinal about right now is prayer, or Christian witness, or how to live an upright, moral, God-trusting life. Why would you, when all they seem to know about is covering up sex crimes, inappropriate behaviour among prelates, political infighting at the Vatican, and the existence of a clandestine gay cabal at the highest levels in Rome?

All of which is, for ordinary church-going lay Catholics like me, profoundly disturbing. How could an organisation that professes a direct link to Christ – "You are Peter," Jesus told the first bishop of Rome, "and on this rock I will build my church ..." – have gone so far off the rails that it now seems a power-crazed, untrustworthy and corrupt institution, out to save its own skin at almost any cost?

The people in the pews are reeling from shock: go to any mass at any church in Britain this weekend, and there will only be one topic of conversation in the porch afterwards. How did it come to this? What on earth has been going on in our church?

I am a little less surprised than many of my friends. I have been writing about the church, and observing it up close in Rome and in Britain, for 25 years. I have seen the politicking, the bitchiness, the in-fighting, the constant focus on who's in, who's out, who's up and who's down. I have been covering stories of ecclesiastical sex scandals for decades: they may be at a zenith now, but they're nothing new. And I have witnessed so many outrages that the only thing I tend to think now, when I hear yet another outlandish rumour, is that the more far-fetched it sounds, the more likely it is to be true.

So I am not as shocked as others, but I am angry: very angry indeed. Because my church – the church to which I and generations of my relatives have been giving their money, allegiance, and sometimes even (as nuns, monks and priests) lives has, quite simply, failed. It has failed to give witness, at an institutional level, to the gospel message with which it was entrusted by Christ. "You are Peter, and on this rock I will build my church," he said: but the descendants of Peter, the bishops and cardinals of today, seem more intent on smashing the rock to pieces than building on it.

I am angry too because it seems to me – and, I think, to many of my fellow lay Catholics – that our church has come to be seen entirely in terms of the men who run it. That, of course, is understandable: not only do they hold resolutely on to the reins of power, but they are also the ones who have perpetrated the crimes. One of the more unsettling moments of the pope's UK visit in 2010, for me, was when he called on "the whole church" to atone for its crimes. But those were not my crimes, Pope Benedict: I am not one of the ordained men who has abused children or helped cover up their abhorrent behaviour, and I resent being treated as one.

In fact, all around me I increasingly hear these words from my fellow Catholics: not in my name. These crimes that have been committed, this power that has been abused, this trust that has been betrayed: not in our name, Your Holiness, has it happened. Guilt has dogged my church through the centuries, and it's a guilt that has often been planted most deeply among the lay people: every week at mass for many years I have heard the priest in the pulpit reminding and cajoling and persuading us to go to confession, to repent, to bathe in our guilt and be freed from it. Well, not this time: this guilt is not mine; this is the guilt of the hierarchy, the guilt of the priests, the guilt of the ordained men who run my church and who have been determined for centuries that they would not share the running of the church with anyone who was not one of them.

And therein, it seems to me, lies the real root of our problems. Because what has gone wrong with the church is, at heart, about a concentration of power in the hands of one tiny group. A tiny group of ordained, mostly Italian, men, when we are an enormous church of ordained and unordained men and women of all nationalities, from right across the globe.

If the Catholic church is to survive – and those churchmen in Rome and elsewhere who smile in their superior way, and say the church has had many crises in its history have not, I think, quite understood the measure of this one – then that power must be devolved. Lay people – we, the vast, silent majority that makes up our church – are a gigantic, tragically untapped resource for leadership, for witness and for evangelisation. In the 1960s the liberalising Second Vatican Council recognised that, and the best revolution in the history of Catholicism seemed to be under way, only to be snuffed out in its infancy, smothered by those ordained men who feared losing control more than they feared being part of a church that was out of touch, sidelined and irrelevant.

Lay women, the biggest group within the church, are the most silent of all silent majorities. Yet the women of the Catholic church are its backbone: its strength, its prayer powerhouse, its unseen workers. They are also, I believe, its wisdom, its common sense and its conscience. If the Catholic church had done as most institutions have done over the last 30 or so years, and invited women to become its leaders alongside men, it would have discovered – as institution after institution has discovered, the world over – that it could not run itself properly without them.

I go to mass most Sundays but I couldn't bring myself to go last weekend. This church isn't the church I want to belong to. My only sliver of hope is that, through the centuries, it has sometimes brought itself to the very brink of self-destruction and, at the 11th hour, managed to turn itself round and live to fight another day. Can that happen again? God knows. But of this I am certain: if the Catholic church is going to pick itself up it needs to make some very big changes indeed. Trust the laity, share the power, open the pathways, make the mechanics transparent; and that's just for starters. Oh yes: and read the gospels too. Was this the church Christ wanted? If not, let's get back to that rock, and see whether we can build something much, much better.