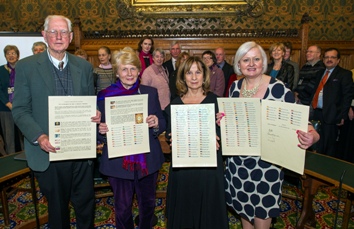 Baroness Helena Kennedy QC is calling for major changes in the Catholic Church and says the current crises are in large part the result of church power being invested in one gender, which is wholly unacceptable in the 21st century.

Lady Kennedy joined forces with Lord Hylton and feminist and spiritual writer Professor Ursula King at the Houses of Parliament (Tuesday March 5) to sign the Catholic Scholars’Declaration on Authority in the Catholic Church.

The Declaration, calling for a more collegial system of church governance in the church, has already gained the backing of 180 leading theologians and Catholic Scholars worldwide. It has already been submitted to more than 20 cardinal electors in Rome this week.

Professor King signed the Declaration on behalf of women in the church, Lord Hylton signed on behalf of the underprivileged and marginalised, and Lady Kennedy added her signature for all men and women suffering from misguided church rulings on sexual ethics including contraception, homosexuality, divorce and remarriage.

Lady Kennedy said there had been serious crises in the Catholic Church and it faced issues of transparency, accountability and governance.

“The Church has existed for millennia and, like all ancient institutions, it is very slow to change and it is confronted with a number of problems. It is almost exclusively run by men and that is how the world was – we don’t have to see it is as a conspiracy – it was the nature of things.

“The power of the Church is located in one gender. We might dress up the story of women playing important roles in the Church but it is actually a fiction. That is unacceptable in a modern world. I do think it creates a serious dysfunction for the Church.”

Lady Kennedy also called on people in the Church to recognise there is a wholly disproportionate distraction about sex and an unwillingness to accept that in relationships people give expression to their love in many different ways.

She said: “There is nothing unhealthy about having a sex drive. Unfortunately, we still cling to this idea that sex is only about reproduction.”

Lady Kennedy added that in her opinion too much of church culture was based on double standards and she called for the church to enable women to become priests and hold positions of power.

Professor King too demanded changes in church attitudes to women.

She said: “The 21st century is the century for women. In all religions, worldwide, women are beginning to assert their rights. Most religious practitioners are women and they are the ones who pass that practice on to future generations. They need to be able to hold positions within the church authority.”

Representing the underprivileged and marginalised worldwide, Lord Hylton called for the church to actively follow the Second Commandment.

He said: “Loving our neighbour is fundamental – it is a commandment which must be right in the mainstream of the Catholic Church.”

The Declaration on Authority, which opened for endorsement late last year, is demanding a return to the principles of the Second Vatican Council and for a reform of church governance to ensure that the church can meet the spiritual and pastoral challenges of today.

John Wijngaards, Declaration co-ordinator and a leading Catholic scholar, said: “The role of the Pope needs to be re-defined from him being an autocratic top-down manager to a spiritual collegial leader empowered to heal, guide and unify. The central synod of bishops should assume its intended tasks in church-wide leadership. Local bishops’ conferences should be more autonomous. Clergy and laity should have real decision-making powers on diocesan level.

“The election of a new pope is a rare opportunity for the Church to reconsider its systems of governance, to introduce a more democratic system of electing leaders and to reassess the leaders’ accountability to the faithful.

“The Declaration has been signed today for groups of people who have particularly suffered from the systemic failure in church governance. Now is the time for change.”