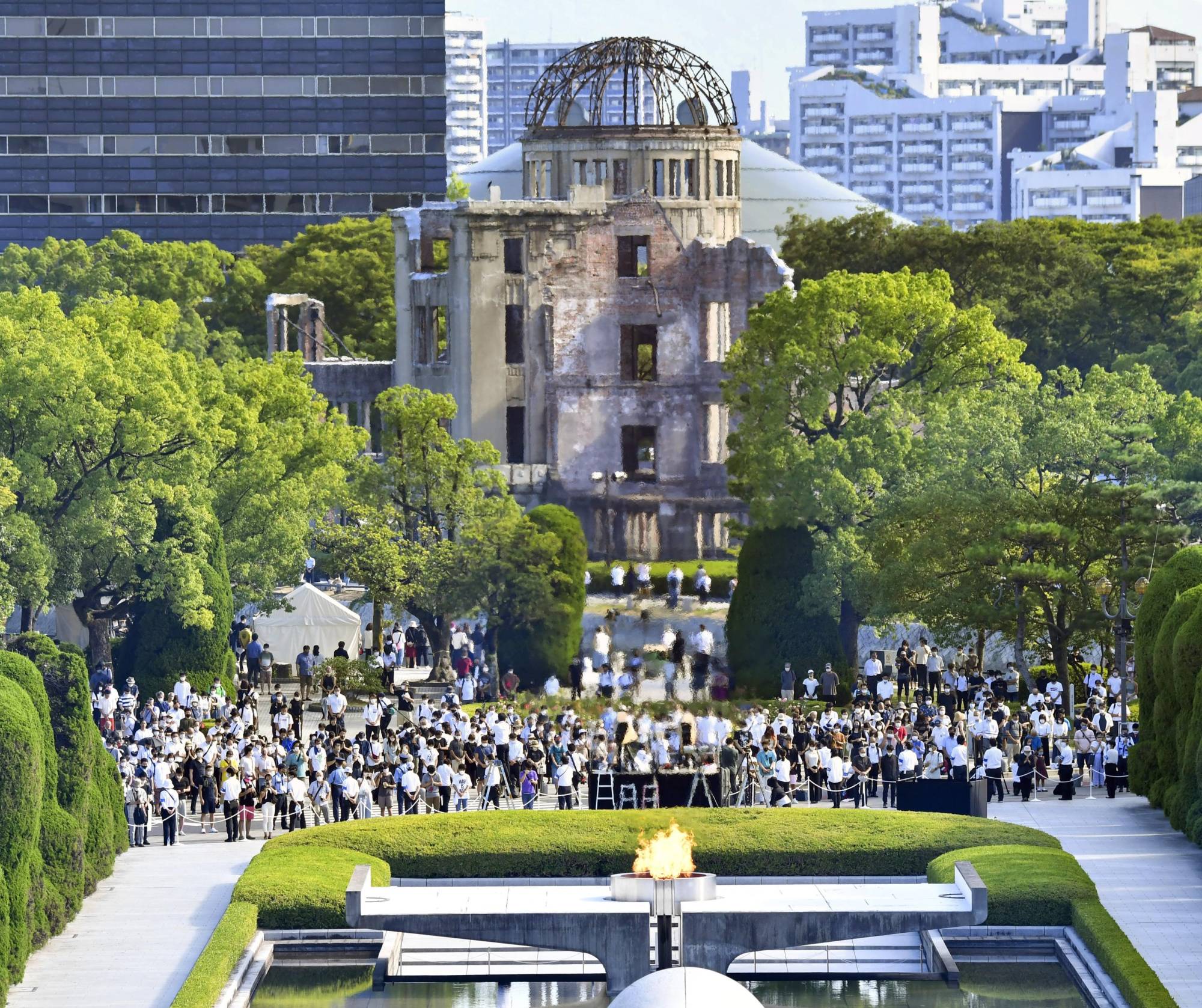 It was just after breakfast time on August 6th 1945 when a single B29 super fortress bomber plane of the US air force appeared in the clear blue sky above the Japanese city of Hiroshima. It was about to unleash the most destructive weapon of war yet developed by mankind on the unsuspecting population going about their business in the streets below.

Piloted by Paul Tibbets, the B29 bore the name of his mother on its fuselage nosecone - Enola Gay. Its payload bomb known as ‘Little Boy’ was the result of years of nuclear research in the US under the code name of the Manhattan Project. It was the start of the Atomic Age.

In the middle of July the first experimental atomic weapon was detonated at the Alamogordo test range in New Mexico. It created a crater 300 metres in width. It was ironically given the code name ‘Trinity’. The scene was set for the first use of nuclear weapons in the theatre of war.

Preparations went ahead on the Pacific island of Tinian for the first attack, the city of Hiroshima, with a population well over a quarter of a million people, the designated target. The bomb was released over the city at 8.15am that Monday morning and exploded at an altitude of just under 2000 feet. The blast equivalent was estimated to be the equivalent of 13 kilotonnes of TNT, destroying an area of just under 5 square miles. It is likely that 90,000 people lost their lives.

Three days later, given the failure of the Hiroshima event to bring about Japanese surrender, the second target city of Nagasaki was hit just after 11am with a bomb given the name of ‘Fat Man’, killing an estimated 40,000 people and injuring many thousands more.

The result of these two bombings was city-wide destruction of buildings, huge loss of life and the long term damage to health from nuclear radiation sickness. The terrible consequences of the use of nuclear weapons in the conduct of war between nations had been demonstrated in graphic terms. In the Cold War years that followed, possession of weapons of mass destruction became the gambling chips in the contest between the super powers.

Six days after Nagasaki, Emperor Hirohito announced his country’s surrender in a radio broadcast. The formal surrender agreement was signed on September 2, aboard the U.S. battleship Missouri, anchored in Tokyo Bay.

Recent events have shown that the global community must work together to overcome the challenges facing us in the 21st Century. We must speak out and call for action, to ensure that the horrific events witnessed in Hiroshima and Nagasaki are never repeated

One witness to the onset of nuclear horror was the Jesuit priest, Pedro Arrupe, later to be elected leader of the Order. Born in November 1907 in Bilbao, Pedro Arrupe left to be a missionary in Japan arriving in 1938, he immediately started to learn the Japanese language and customs. On 8 December 1941, a few hours after Japan joined the battle, he was arrested and imprisoned by the local authorities under the accusation of being a spy. He was released a few weeks after and later, appointed novice master in Nagatsuka, a small locality seven kilometres away from what would later be the epicentre of the nuclear explosion in Hiroshima.

On 6 August 1945, he was in a house with 35 young people and several Jesuit fathers, when, just after breakfast time “a very powerful light, like a magnesium explosion, shot before our eyes”.

He records that “When we opened the door of the room facing Hiroshima, we heard a huge explosion, similar to the roar of a terrible hurricane, which took doors, windows, glasses, unstable walls…, that broke to pieces and fell over our heads”. These were three or four seconds “that seemed to be lethal”, although all those present saved their lives. However, there was no trace of a bomb exploding there.

“We were going round the rice fields around our house to find the bomb’s place, when, fifteen minutes later, we saw that a thick smoke was rising in the city area and we could clearly see big flames. We went up a hill to see better and we could distinguish the place where the city used to be, because what we had in front of us was a completely devastated Hiroshima”, Arrupe narrates.

“A huge lake of fire” spread in front of them, which minutes later “blew Hiroshima to smithereens”. Those escaping the city did it “with difficulty, without running, as they would have wanted to escape that hell as soon as possible, because they could not do it due to the awful wounds they had”.

Arrupe, who had studied medicine, and the rest of the Jesuits, improvised a hospital in the novitiate’s house. They were able to take more than 150 injured people and save almost all of them, although most of them suffered devastating effects of the atomic radiation in the human being.

It took another Jesuit, in the person of Pope Francis during a recent visit to Japan, to declare that nuclear weapons were "not the answer" for global security, peace and stability. "Convinced as I am that a world without nuclear weapons is possible and necessary, I ask political leaders not to forget that these weapons cannot protect us from current threats to national and international security,'' Francis said when in Nagasaki.
"Peace and international stability are incompatible with attempts to build upon the fear of mutual destruction or the threat of total annihilation,'' Francis noted.
"They can be achieved only on the basis of a global ethic of solidarity and cooperation.''

If you look back to the old Roman Missal and read the Introit for the Mass for the Feast of the Transfiguration, August 6th, you will find these words: "All the world shone with thy lightning and the troubled earth shook"

The Psalmist who wrote Psalm 76 could not have appreciated just how awful was that prediction to be, for there is something deeply uncomfortable and prophetic in those few words. Now, some 76 years on, we live with an uneasy stalemate.

I wrote this a few years ago.

There is now no way
of knowing what was said
in those early morning moments
by many voices.

Now no way of hearing their words
(of greeting or recrimination)
traded across a room
or in passing down the street.

Now no way of smelling
the scent of flowers from garden shrubs
or from potted plants rivalling
the staleness of sleep with breakfast done.

Now no way of touching
the outstretched hand of the child
walking with her Mother
just after eight that blue skied hour
Hiroshima Day
dark brightness in the bright darkness
Night Hiroshima.

Only then in the agony of that explosive instant
when over ground, razed of buildings,
human forms that moved, just disappeared.

Only then as the fireball rose
and the firestorm spread outwards
did voices of children cry “Atsui, Atsui”
‘It’s hot’ - but without response.

Only then did silent shuffling ghosts
leaving the stricken town
hold out their savaged hands softly howling
“Tasukete kure”
-‘help if you please’- but none came.
For now do we begin to realise
the transfigured Christ, fire-caught
that August morning of fearsome Dawn.

The use of nuclear weapons in war has raised huge moral issues that are still fiercely debated. Pope Francis gave us this unequivocal statement during the visit to Japan when he declared: "The use of atomic energy for purposes of war is immoral, just as the possessing of nuclear weapons is immoral, as I already said two years ago. We will be judged on this"
Peter has spoken, it is up to us to listen.