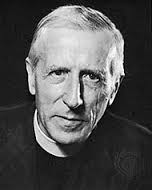 During one of his expeditions in the Ordos desert in China he found himself without the means to offer Mass. Instead he wrote the famous meditation, La Messe sur le Monde, The Mass on the World, a faith-filled statement of his Christian belief. That was in 1927. The opening paragraph sets the tone of the whole essay.

“Since once again, Lord-though this time not in the forests of the Aisne but in the steppes of Asia-I have neither bread, nor wine, nor altar, I will raise myself beyond these symbols, up to the pure majesty of the real itself; I, your priest, will make the whole earth my altar and on it will offer you all the labours and sufferings of the world”.

The book in which it was included, Le Milieu Divin, the Hymn of the Universe, was refused the Imprimatur by Rome. That restriction on his publishing lasted through to his death in New York City on Easter Sunday in 1955.

His great work, the Phenomenon of Man, was submitted to Rome in 1941, was further refused and in subsequent years, the restrictions on him were increased.

Yet through it all, he remained faithful to his faith, his priesthood and the Society of Jesus. In more recent years, there have been signs of a slow accommodation to his thought, beginning in the years of the Council where his privately circulated thoughts are said to have had a considerable influence.

Back in the ‘80s, I was visiting Lindisfarne, Holy Island, off the Northumberland coast. I knocked on the door of the local Anglican chaplain who invited me in, gave me tea and we talked for an hour, much of it about deChardin. He had never read La Messe sur le Monde. So when I got home, I typed it out and sent it to him. I will always remember the letter he sent me in which he said “We may never meet again, but thanks for a lift on the way”.

Too many theologians of the 20th Century received similar treatment from Rome, as do others, priests, sisters and layfolk, in our present time. Somehow we must understand that restrictions such as those experienced by men like deChardin, in the end will not stand the test of time.

Now we have Papa Francesco, himself a member of the Society of Jesus. It would be good, if at some time in the coming years, he was able publicly to recognise and proclaim the value of deChardin’s life of faith, his prophetic writings and the bridge he built between science and belief.